An extraordinary image of a Tibetan fox pouncing on a startled marmot taken in China’s Qilian Mountains has won Yongqing Bao the title of Wildlife Photographer of the Year 2019.

This year’s photographic competition received 48,000 entries from 100 countries, but it was this image of a rarely observed species displaying behaviour that few people have ever witnessed that impressed the judges.

Roz Kidman Cox, the Chair of the judging panel, says ‘Photographically, it is quite simply the perfect moment. The expressive intensity of the postures holds you transfixed, and the thread of energy between the raised paws seems to hold the protagonists in perfect balance.

‘Images from the Qinghai-Tibet Plateau are rare enough, but to have captured such a powerful interaction between a Tibetan fox and a marmot – two species key to the ecology of this high-grassland region – is extraordinary.

The award for Young Photographer of the Year has been presented to Cruz Erdmann for his picture of a displaying big-finned reef squid, taken during a night dive in the Lembeh Strait off the coast of North Sulawesi, Indonesia.

Theo Bosboom, nature photographer and member of this year’s judging panel, says, ‘To dive in the pitch dark, find this beautiful squid and be able to photograph it so elegantly, to reveal its wonderful shapes and colours, takes so much skill.

‘What a resounding achievement for such a young photographer.’ 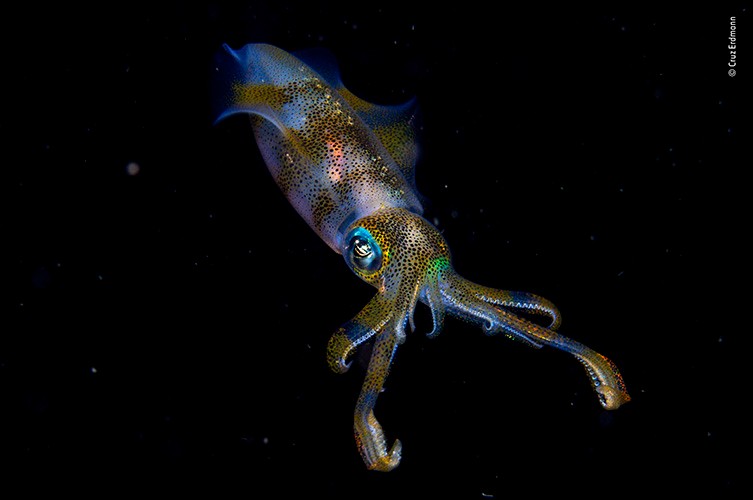 Night Glow, by Cruz Erdmann, won the Young Photographer of the Year

The two winning images will feature alongside 98 photographs across 19 categories in the Wildlife Photographer of the Year exhibition at the Natural History Museum, which runs until 31st May 2020.